THE MUSIC OF CAPOEIRA 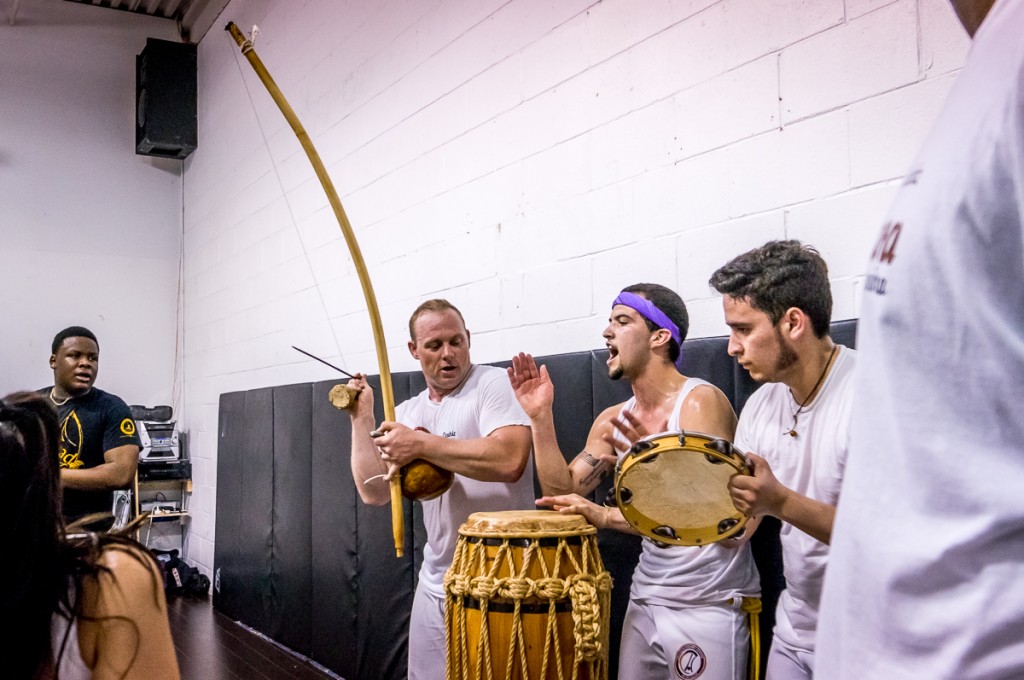 Many cultures use Music and Song to tell their histories, to teach morals and to inspire their people.

The rhythms and music of Capoeira ranges in tempo from the very slow sounds of Angola to very fast rhythms of Sao Bento Grande de Bimba (regional). Each rhythm denotes a different style of Jogo (game) and alters the priorities of the players. Some rhythms call for a slower more strategic type of game in which controlling your opponents ability to manoeuvre is most important.  Other rhythms beckon players to be more acrobatic and less confrontational; while other rhythms demand a faster more martial game.

The songs mostly fall into 4 main categories and usually progress in a particular order during the roda depending on the type of capoeira being played.

Mostly sung by Angola schools a ladainha Is a solo usually sung by the most senior capoeirista present. A Ladainha can vary in length and subject matter, but are almost always metaphorical and include a moral lesson, story, history or mythology. They can be improvised to suit a particular occasion or structured like perfect poetry.

In an Angola roda the songs generally appear in this order:

In a Regional roda the songs would generally appear in this order:

The collection of instruments used in a capoeira roda are knows as the batteria. Although Mestre Bimba would run his rodas with only 1 Berimbau and 2 pandeiros, the batteria usually consists of:

A berimbau is a single stringed instrument that looks similar to an archery bow. The berimbau utilizes a hollow gourd to resonate the vibrations created by tapping the string (arame) with a stick (baqueta). Variations in the sound are created by applying different levels of pressure to the string with a stone or coin (pedra or dobrao).  A shaker (caixixi) is also held in the stick hand to add another layer or richness to the sound produced. Traditionally 3 berimbaus are played: the Gunga, Medio and Viola. These produce a deep, medium and sharp sound respectively; the variations in tone are created by the size of the gourd from the large gunga that produces a deep sound to the small high pitched viola.

The Berimbau is “in charge” of the roda and its rhythms and changes dictate the type of game that is to be played,

The pandeiro is basically a tambourine with a skin. It is held and moved in one hand and played with the other. Playing the pandeiro involves using a set rhythm of slaps, thumb strikes, finger taps and shakes.

The atabaque is a conga-like drum that is a very common instrumental component to a roda. Its skin is secured to the drum with rope and a metal ring wedges are driven between the ring and the drum to tighten the skin and tune the drum. It is played with a variety of Hand strikes in a number of percussive rhythms.

A double cow bell. Not always present at modern rodas but adds a richness and tonality to the music. It is held in one hand and a short stick is held in the other. The different sized bell make 2 basic sounds and they are hit in percussive patterns.

a piece of wood with ridges carved in it. It is held in one hand and is played by running a stick across and back. Predominantly used at Angola rodas

Hi team. The academy parking lot has not been plou

Down but not out. Lockdown have forced our academy

Wishing you all a safe, prosperous, healthy, happy

Wishing you all the happiest of holiday seasons.