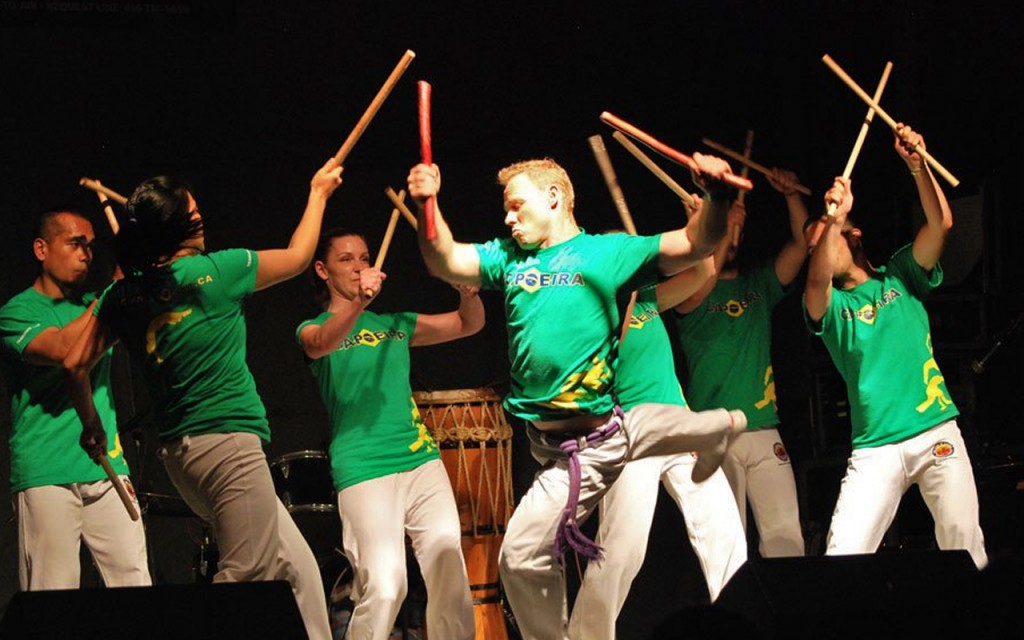 Santo Amaro City in Recôncavo, city marked by green cane fields, is a land rich in manifestations of popular culture with African heritage. Cradle of capoeira in Bahia, was also the stage for the emergence of Maculelê, strong dance drama, for male participants, who dance group, beating the tears (rods) to the rhythm of the drums and the sound of singing in African dialects or in popular language. It was the highlight of revelry popular secular celebrations in places, commemorating the feast of Our Lady of Purification (Feb. 2), the city’s patron saint. Among all the festivals of Santo Amaro, Maculelê was most contagious, the pace and rich vibrant colours.

Presentation of group shows of the Golden Cord – 80 years.

Its origin, however, as indeed occurs in relation to all manifestations of African folk, is obscure and unknown. Believed to be a popular act of African origin who have flourished in the eighteenth century in the sugar plantations of Santo Amaro, and become a part of the local celebrations. Some support, however, that the Maculelê also has indigenous roots, and then African-Indian origin. Legend has it that the staging of Maculelê based on an epic episode occurred in a primitive village in the kingdom of Yoruba, where I once went out together all the warriors to hunt, staying in the village only a few men, mostly elderly, among women and children. Also took advantage to attack an enemy tribe, the largest number of warriors. The remaining men of the village, led by a warrior named Maculelê, would then be armed with short sticks of wood and faced the intruders, showing such courage that could put them to flight. When they returned the other warriors, became aware of this and promoted a great feast, in which Maculelê and his companions showed the way in which they fought the invaders. The episode then began to be celebrated frequently by members of the tribe, enriched with music and body movements peculiar feature. The dance would be like a tribute to the courage of those brave warriors.

Earlier this century (the century), with the death of the great masters of Maculelê Santo Amaro City, the merriment ceased to appear for many years, the festivals of the patron. Until, in 1943, appeared a new master – Pauline Aluisio de Andrade, known as Popo’s Maculelê, regarded by many as the “father of Maculelê in Brazil.” Mestre Popo gathered relatives and friends, who taught dance, based on his memories, intending to include it again in religious places. Formed a group, the “Set Maculelê Santo Amaro,” which became well known.
It is the studies developed by Manuel Quirino (1851-1923) who are indications that the Maculelê would be a fragment of the Cucumber, dance drama in which blacks were beating wooden rollers, accompanied by chants. Luis da Camara Krab, in his “Dictionary of Brazilian Folklore,” points out the similarity of Maculelê with the Congo and Mozambique. It should also cite the book of Emilia Biancardi, ‘Olelo Maculelê, “one of the most comprehensive studies on the subject.
Today, Maculelê is integrated into the ratio of Brazilian folkloric activities and is often presented in the displays of capoeira groups, folk groups, colleges and universities. However, you should record the comments made by Jose Augusto Lopes Fascio, master Baiano Hook, a former student of Mestre Bimba and Capoeira teacher at the Federal University of Rio de Janeiro: “… this work of dissemination, Maculelê has undergone profound changes in her choreography and costumes, which results in a distortion reverses. Example: what was originally presented as a choreographed dance in a circle, with a couple of extras moving inside under the command of Master Maculelê was replaced by an entry in a single file with the pairs dancing alone and having no more command of the master. The broken swing, facing the Frevo, was replaced by a hard swing, swinging a little.
“More recently, it is the presentation without an entry in the queue. Each extra stands in isolation, without composing the pair, and performs movements separate, more along the lines of a common classroom exercise than a presentation of fine folk.
“We must recognize that not only Maculelê but all the other popular events are always live highly exposed to changes over time and over the years. (…) I believe that all these modifications should be recorded, to allow researchers in future to study the transformations and also to target those who will practice this popular pastime of extreme wealth, plastic and musical rhythm that Maculelê is.”